Flower plants contain a number of small molecules, characteristic of a genetic material called mARN that can bind to the virus strain and slow down its replication in human genes. Prior to this study, it was believed that genetic materials in plants were fragile and easily destroyed by environmental factors.South China Morning Post reported that according to research by Zhang Chenyu, a professor at Nanjing University, published in Cell Research in 2014, Zhang’s group found honeysuckle able to remove Influenza A virus in mice effectively.

But Zhang’s research shows that these plants’ mARN fragments may remain nearly intact after boiling, a required process when preparing herbal medicine – and they tend to concentrate in the mice’s lungs. Experiments with herbal treatment have more than doubled the survival rate of the mice.

The research led to a stimulative discussion in the scientific research community, because if plants can kill viruses, it can also alter genes. Genetically modified plants such as soybeans and corn have been certified safe for consumers because scientists believe that plants cannot change the genetic code in human cells. Because of this, no transgenic animals have been approved for food so far because they are considered closer to humans, which in turn pose a greater risk to health from gene disturbance.

This research is very significant in finding a remedy close to the Chinese to fight SARS-Cov-2 virus which has been a global pandemic. A few days after announcing the full genome sequence for the SARS-Cov-2 virus last month, a team at the Chinese Academy of Sciences’ Shanghai branch created a list of about a dozen herbs that may be able to suppress viruses by simulating on computer how these herbs interact with the virus strains.

Chinese researchers have also made use of the Shanghai Synchrotron Radiation Facility, one of the most expensive and advanced light sources in the world, to study the actual structure of the virus to find clues for a successful treatment.

The effects of many plants are difficult to quantify, and “when you put all of them into a bowl of soup, it is no longer a science, it’s an art,” said an anonymous doctor.

It is also difficult to say exactly how the herbs work; because in most cases they are used by patients in addition to Western medicine, and some patients in critical conditions also receive technical support such as artificial lungs.

Proponents of herbal medicine have shown that China has experienced more than 320 fighting epidemics recorded since the Han Dynasty more than 2,000 years ago. Chinese medicine doctors have accumulated a wealth of knowledge and experience from these epidemics to apply to current medicine.

Pandemics in China do not cause death rates as high as some diseases in Europe, such as the time of the Black Death in the 14th century, wiped out 60% of the entire European population. Dr. Tu Youyou, who won the Nobel Prize for the artemisinin, a drug therapy for malaria that saved millions of lives, took the idea from a plant used in traditional herbal formulas.

Eastern Medicine fought against the Covid-19 epidemic in China

While the number of people dying from Covid-19 continued increasing, there were noticeable hospital discharges earlier this month: two in Fenzhuan, Hunan Province; three other cases in Hebi, Henan; and two more in Hangzhou, Zhejiang. These people are among the first patients to fully recover with a combination treatment of both Western and Chinese medicine.

In China, each province has the right to formulate its own treatment policies. Hubei until recently did not routinely treat patients with herbal remedies.

This led the Chinese government’s anti-epidemic task force in Wuhan, the capital of Hubei, to send an emergency directive last Tuesday to all anti-corona-virus-epidemic-related agencies and hospitals, giving them 24 hours to ensure herbal tea is provided for all cases and suspected infections.

According to statistics, less than one-third of patients in Hubei were given herbal medicine, compared to nearly 90% in other regions in China. “The absence of traditional medicine has affected the outcome of efforts to cure patients,” the directive said.

The directive reflects a growing consensus among Chinese health experts, arguing that herbal medicine can and should play an important role in the fight against coronavirus.

As of Feb. 19, the epidemic has killed more than 2,000 people, mostly in Hubei. The excessive number of patients has put enormous pressure on the medical staff as well as the provincial health resources. However, the lack of herbal treatments for patients with only mild symptoms may also be one reason.

Meanwhile, the southern provinces of Guangdong and coastal Zhejiang also have a high number of patients after Hubei. Patients were given herbal remedies to relieve symptoms even before the virus tested positive.

Guangdong reported on February 14 that the death rate was only 0.1% of the total number of infected people – compared with 2.6% for Wuhan. None of the 1,155 patients infected with the virus in Zhejiang died.

Whether herbs can kill viruses is still a hotly debated topic in the scientific world. The virus is difficult to destroy because it does not live as an independent organism like a bacterial cell. Once in the body, it releases strange genes into the cells of the patient’s body and replicates rapidly, causing damage to human health.

A golden rule of herbal therapy is that the doctor must meet the patient. Among the first medical support specialists to come to Wuhan after the outbreak, there are the most famous and reputable Chinese traditional medicine doctors such as Tong Xiaolin, Huang Luqi and Zhang Boli. 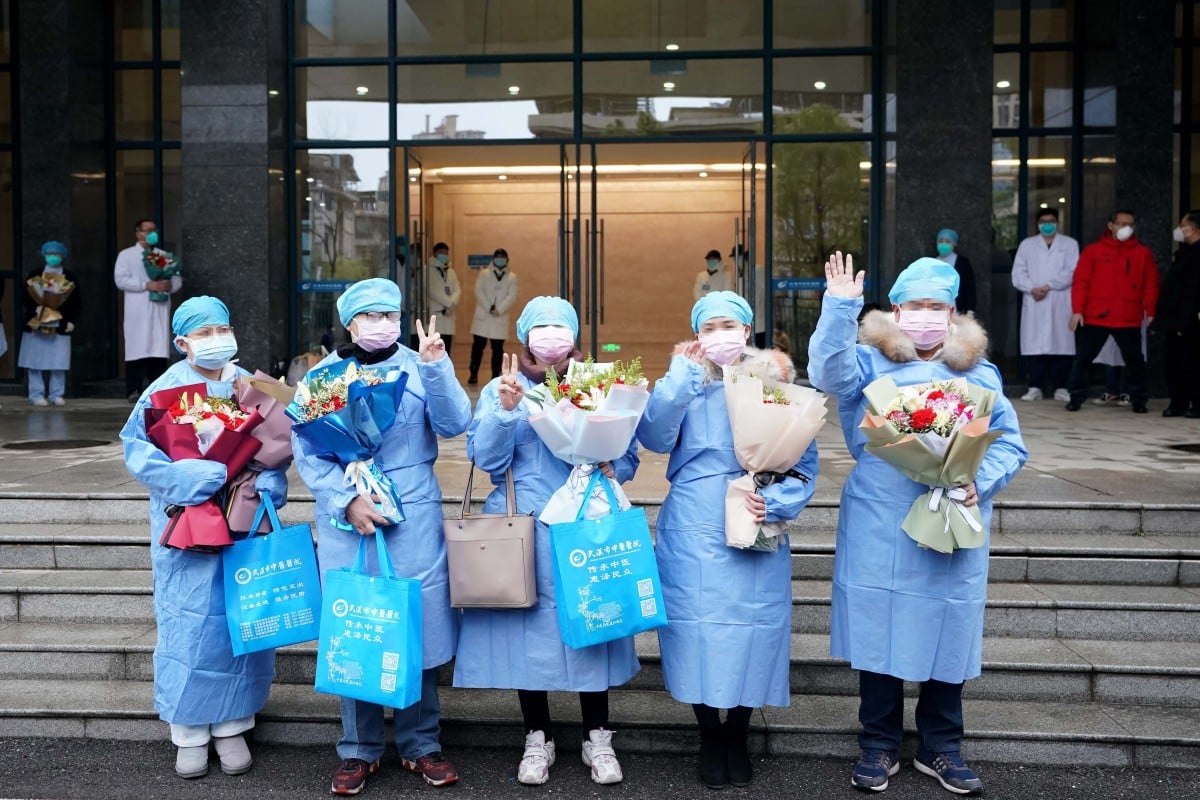 Twenty-three coronavirus patients were discharged from hospital on Thursday after treatment with both traditional Chinese medicine and Western medicine( Photo: Xinhua)

They spent days and nights in quarantined areas checking patients’ veins and their physical condition, asking questions and updating herbal formulas for patients during the different stages of disease development.

On social media in China, news on traditional medicine practitioners’ efforts has been welcomed with both praise and contempt. While many people advocate the use of herbs based on their personal experience, some are skeptical, even against it.

“Why can’t Eastern medicine doctors be quiet and let Western doctors do their jobs?” One said on Weibo.

A doctor in Beijing, who was reported on medical work in Wuhan, said front-line doctors prefer to use Western medicine in part because their mechanisms and side effects are simple and studied more in depth. In contrast, herbal formulas sometimes contain dozens of ingredients; some of which are unfamiliar with modern science.

Antiviral drugs need to interfere with human genes to wipe out the virus inside, and the prevailing opinion of today’s biologists is that plants cannot do that.

But in fact there are many data to support the effectiveness of herbs in antiviral treatment. Although the disease is still ongoing, Chinese researchers have obtained some promising initial results from clinical observations.

Zhang Boli, who is also a member of the national council of experts who advises the government, said during a press conference last week: “A group in Guangzhou treated more than 50 patients and then none has shown serious symptoms. In Shanghai, patients who receive the combined treatment usually take seven or eight days to test negative [for corona virus]. Without herbal medicine, it may take more than 10 days.”

Last Wednesday, several large factories in Hubei went into operation to produce herbal drinks for people in quarantine. Drinks are boiled and distributed in plastic packaging. A factory in Wuhan can meet the daily consumption of 30,000 patients.

Since the onset of severe acute respiratory syndrome (SARS) in 2002-2003, the World Health Organization has conducted research on the effects of herbal medicines. In mainland China, where about half of all patients in the national health system are treated with herbal remedies, doctors have reported that combination of Western medicine and herbal medicine significantly reduces severity of symptoms, mortality rate and side effects.

One of the clearest examples, all 58 patients at a public hospital in Guangzhou have recovered and no health worker was infected. A study by the University of Hong Kong involving local patients also suggested herbal treatment as a safe, effective and affordable way to prevent SARS, according to the information on WHO’s web site.